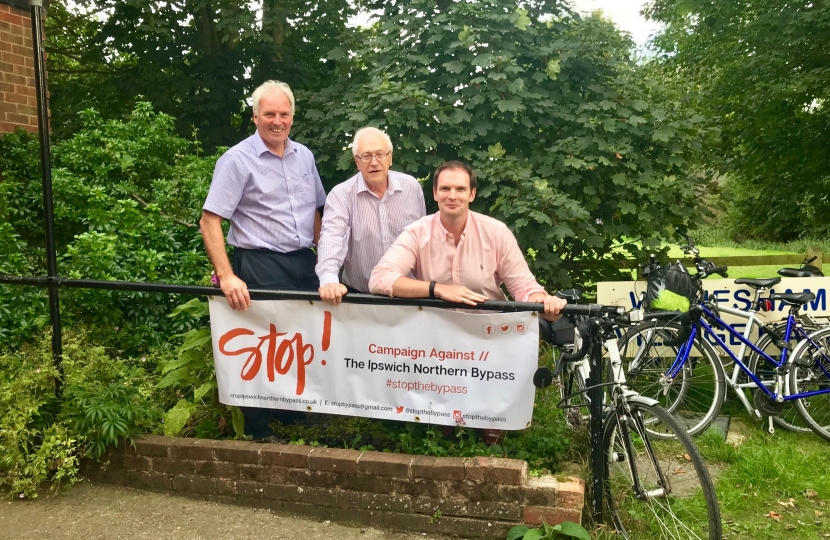 20,000 new houses will need to be built to fund the bypass, concreting over the Suffolk countryside to the north of Ipswich, creating a new town the size of Bury St Edmunds.  Residents in Kesgrave will be among the hardest hit by the extra traffic, pushing more cars onto the already congested A12 between Martlesham and Woodbridge. With Suffolk County Council’s ambitions to become the Greenest County, these additional cars will create more pollution, not less.

Dr Dan firmly believes that these current proposals are about extra house-building that’s simply not needed, least of all in this very special part of Suffolk.  There’s little or no evidence to show that an Ipswich Northern Bypass will do anything to reduce traffic congestion in Ipswich.  With the Orwell bridge closed on average for only 18 hours per year, a £1bn road is a completely disproportionate response to a problem that could be solved by better wind-shielding and traffic management of the bridge.  Dr Dan would much rather see that money being invested in our local schools, hospitals and public services.

Central Suffolk and North Ipswich, Dr Dan Poulter, has today laid a petition in Parliament, urging the Government to reject calls for an Ipswich Northern Bypass.

Central Suffolk and North Ipswich MP, Dr Dan Poulter, has today written to the Secretary of State for Transport to formally register his opposition to proposals for an Ipswich Norther Bypass.  The letter was also signed by neighbouring MP and Work & Pensions Secretary, Dr Therese Coffey.