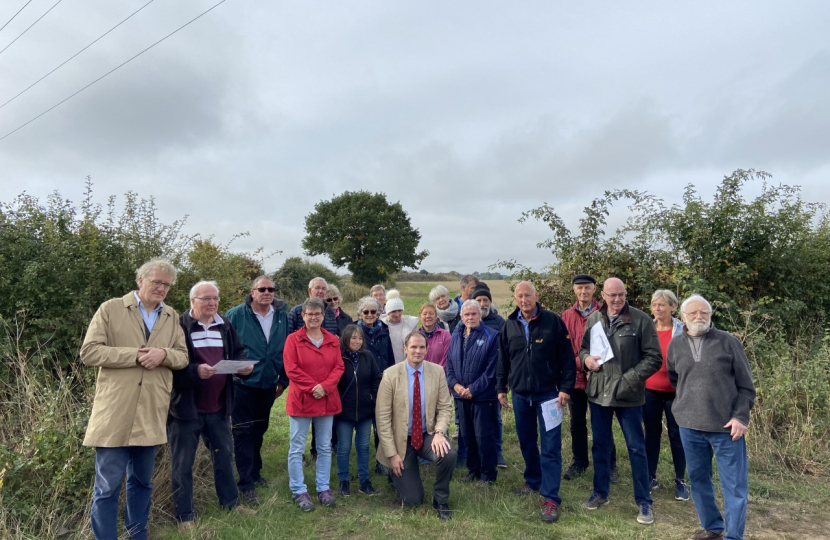 Central Suffolk and North Ipswich MP, Dr Dan Poulter, is supporting residents in their fight against solar park proposals in the mid Suffolk village of Palgrave.

During a visit to Palgrave, Dr Poulter met with a number of local residents where he heard their concerns about the impact of the proposed PACE solar park at Grange Farm, which seeks to deliver a 220-acre solar power station in the heart of the village.  It is understood that a further application is potentially expected which would require a further 130 acres for solar use in the village.

Residents are concerned that the sheer scale of the proposed PACE development alone will consume Palgrave and according to the application, the main route to and from the village will be lined with imposing 3m high black silicone panels.  They are also concerned that due to the size and scale of the proposed development, it will be clearly visible from the A143 and adversely affect the surrounding areas with considerable loss of amenity, including, although not exclusively, Lion Road, Priory Road, Jobs Lane, Millway Lane and Marsh Lane.  A similar application in nearby Rickinghall was recently rejected, in part due to its proximity to the historic church and in the case of Palgrave, views of the medieval church tower and Suffolk countryside will no doubt be obscured by the proposed development.

The land being proposed for Grange farm solar is classified is Grade 3 a/b.  Given the ongoing conflict in the Ukraine and the need for Britain to strengthen its food security, residents are concerned that if the application is approved, some 220 acres of prime agricultural land will be taken out of food production.

Commenting on the application, Dr Poulter said “We all recognise the importance of increasing Britain’s solar energy capacity in order to improve both our energy security and reducing our carbon emissions.  However, what is being proposed in and around Palgrave is completely unacceptable.

“If given the go ahead, the impact of this solar parks will completely overwhelm this small village and at the same time, it will also take hundreds of acres of prime agricultural land out of food production at a time when we need to be increasing our food security and reducing the environmental impact of food miles.

“The time has come for Babergh and Mid Suffolk District Council, as the local planning authority, to introduce sensible planning policy and guidance relating to solar parks with a strong presumption in favour of brownfield and former industrial sites.  Unless this is done, sadly we will continue to see the potential threat of future large scale solar parks being sited in inappropriate locations here in Suffolk due to piecemeal applications coming forward from developers.”

“I share the concerns and frustration of residents in Palgrave and this is why I have written to the Leader of Mid Suffolk District Council echoing the concerns of residents and urging the council once again to introduce a strategic energy policy to sit beneath the Local Plan.  Until such times as a more strategic, joined up plan for energy development is drawn up, I fear that we shall continue to see piece-meal and speculative development coming forward at risk to our food security and also to our precious Suffolk countryside.