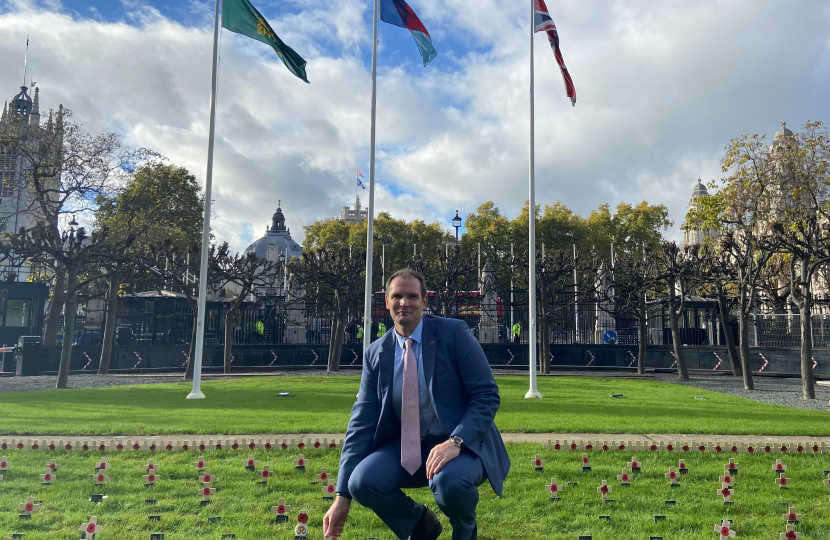 At the going down of the sun, and in the morning, we will remember them – those words are repeated by us all, every year.  And they never lose their poignancy – whilst any direct memory of the trenches in France, or the First World War may be gone, those who went before us gave their lives so that we could live ours, so it is up to all of us to remember their sacrifice; a sacrifice that can never truly be repaid.

As part of a week of remembrance in Parliament, today I was honoured to place my token of remembrance on behalf of the people of Central Suffolk and North Ipswich in the Constituency Garden of Remembrance.

In the run up to Remembrance Sunday, many veterans and volunteers turn out in their droves to support the Royal British Legion, a charity who do so much to support our Armed Forces Community.  The Royal British Legion was formed in 1921 and has supported veterans of both world wars and more recently, conflicts in the Falklands or Afghanistan, providing financial support or access to rehabilitation services.  Although they are perhaps best known for their annual Poppy Appeal, in recent years, armies of volunteers in our local communities have also rallied to create incredible displays of hand made poppies cascading around church towers or within the churches – many of which also bear the lesser-known purple poppy, a symbol of remembrance here in the UK for animals that have served during conflict.  Not only are these displays truly remarkable and involve a huge amount of work, they also contribute significantly to the annual poppy appeal and are testament to the ongoing support shown by our local communities here in Suffolk.

This year, perhaps Armistice Day and Remembrance Sunday are all the more poignant as we are forced to remember the cruel and devastating impact of war as we witness the ongoing destruction being caused by Putin’s continued invasion in the Ukraine.

As it has done throughout the decades, Big Ben will strike 11 times to mark the start of the two minutes of silence at 11 am on Armistice Day and again on Remembrance Sunday - joining with bells across the country and across the world to commemorate those who have lost their lives in the two world wars or later conflicts.

In this first Remembrance Sunday since the sad passing of HM the Queen, images of falling poppies will once again be projected onto the Elizabeth Tower as a further act of remembrance.

Here in Suffolk, I shall be laying my own wreaths of remembrance and I am sure that, as in previous years, I shall be joined by hundreds of others doing the same and paying their own personal tributes, as well as representing individuals, regiments and communities from across Suffolk.

I would like to pay tribute to all those who have served in HM Armed Forces, both past and present – to those who gave their lives so that we could live ours, I give my grateful thanks.