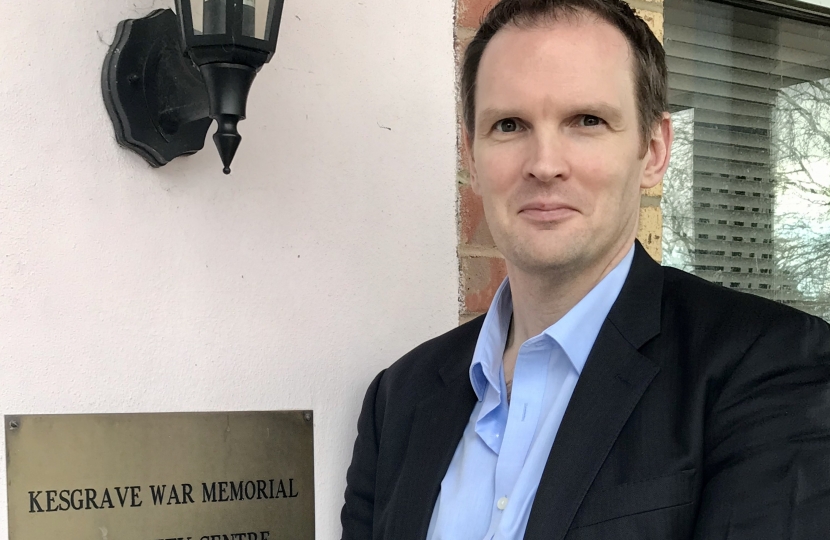 Central Suffolk and North Ipswich MP, Dr Dan Poulter, has called upon the Government to prioritise improvements to the A12 between Ipswich and Lowestoft, specifically calling for the road to be retrunked and taken back within the remit of Highways England.

Calls for improvements to the A12 north of Ipswich have been ongoing, dating back as far as the mid 1980s and despite these calls, the last major work to this stretch of road was the Saxmundham Bypass, which was completed in 1988.  Since then, traffic has increased by around 50%.

The A12 north of Ipswich is a vital strategic highway serving the East Suffolk coast, which is now playing an important role in the supply of the UK’s clean energy requirements.  Through its rapidly expanding wind farm industry, much of which is serviced out of Lowestoft and Great Yarmouth at the northern end of the A12, it is also an internationally recognised centre of excellence in the production of renewable energy.  It is anticipated that the area will produce some 30% of the UK’s energy requirements by 2030, and the region is leading the way in delivering sustainable and clean energy solutions to underpin economic growth across the UK.

Earlier this year, East Suffolk’s three MPs raised the possibility of retrunking the A12 with Government Ministers and following further dialogue with the Department for Transport, Dr Poulter has submitted a detailed evidence base for further examination.

Central Suffolk and North Ipswich MP, Dr Dan Poulter said: “There is an urgent and pressing need for a strategic vision and investment in the A12.  With two major energy projects being at the Development Consent Order (DCO) stage - EDF’s Sizewell C proposals and Scottish Power Renewables East Anglia One North and East Anglia Two, the A12 is now a route of national, as well as local and regional significance.

“In addition to those who live and work in the area and rely on the A12, the Suffolk Coast attracts thousands of tourists every year and retrunking the road would open the door for greater investment, improving traffic flow and safety and future proofing the A12 as part of Suffolk’s emerging Major Road Network.”

Also backing calls for the A12 to be retrunked is Suffolk Chamber of Commerce.  Chief Executive, John Dugmore said “Suffolk Chamber welcomes this initiative from Dr Dan Poulter as we believe it is important that a national body, Highways England, has direct responsibility for the A12, given the number of nationally significant initiatives that will impact on the road over the next few decades.”

“We also consider it essential that this stretch of the A12 is under the aegis of the same authority to that of the A47 north of Lowestoft as the two are, in effect in effect, one route linking Essex/London on the one hand with key business locations along the whole of the Suffolk and Norfolk east coast.”