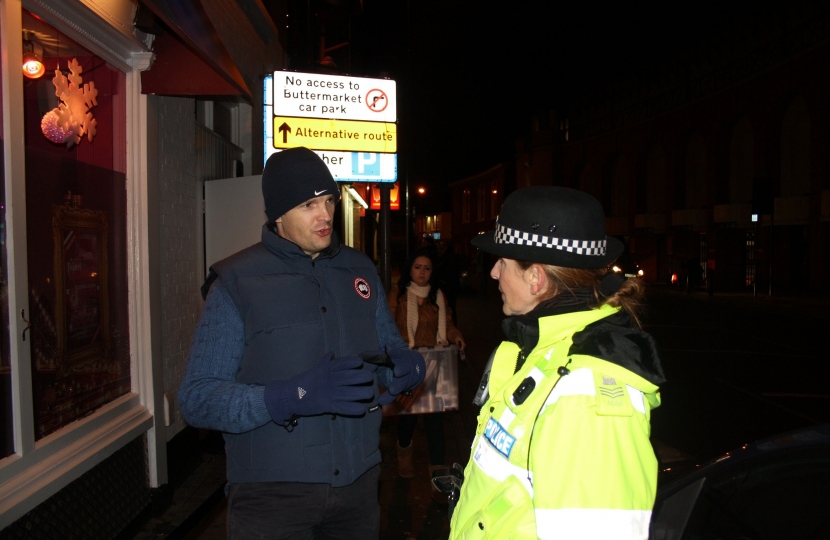 On Friday night, Dr Dan joined local front line police officers on foot patrol in Ipswich to see at firsthand the hard work Suffolk police do in keeping the town safe so that people can enjoy themselves when visiting our local bars and clubs.

On what was one of the busiest nights of the year, Dan was heartened to see how skilfully the police ensured that calm was maintained. Ipswich has a thriving night-time economy and, earlier this year, was awarded Purple Flag status in recognition of the safe way in which the town is managed at night. Ipswich has also taken the lead in promoting sensible drinking in its bars, clubs and off-licences with the ‘Best Bar None’ scheme, a partnership led by Ipswich Borough Council, Suffolk Constabulary and Ipswich Central which creates a safer evening environment by accrediting licensed premises. These awards have been initiated because of the tireless efforts of our local police and Dan would like to commend all of them for their excellent work on our behalf.

Dan also visited the new SOS bus based in Cardinal Park. The bus has been placed in the town as part of a pilot scheme over the festive period and is manned by trained paramedics who can offer medical assistance to anyone who appears vulnerable after drinking. The bus also helps to take pressure off busy local A&E services so that other medical emergencies can be prioritised.

The cost to our NHS resulting from alcohol-related fights, injuries, and other A&E attendances, as well as alcoholic liver disease (but excluding alcohol-related cancers) was estimated at £2bn last year, and it is rising. During his work as an NHS hospital doctor in A&E last summer, Dan treated a predictable pattern of casualties on Friday and Saturday nights. The holidaymakers, the stag and hen parties, the comatose teenagers covered in blood or their own vomit, were all attending hospital for one reason – because they had drunk far too much alcohol. The volunteers in the SOS bus who give up their time on a Friday and Saturday in Ipswich night deserve to be praised for their work.