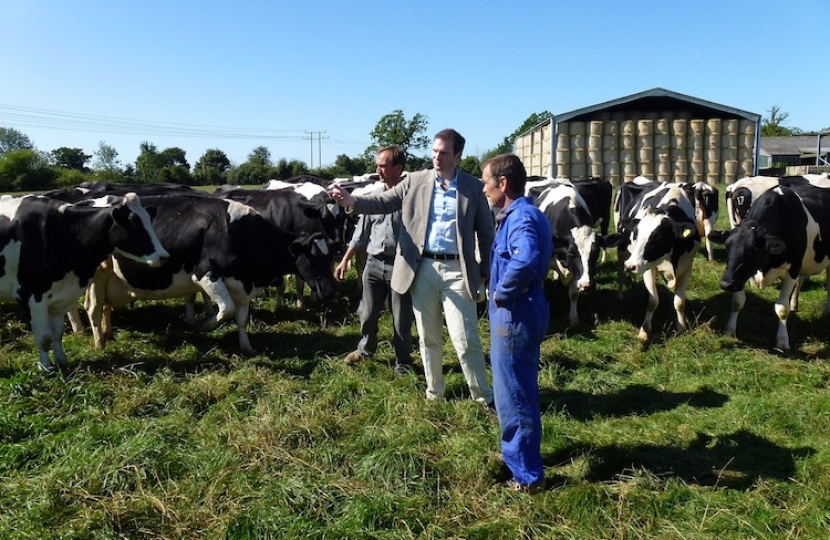 Last week, Dr Dan visited Church Farm in Cotton, near Eye, where he met with farmers John and Andrew Bullock, who look after over 100 dairy cattle. Dan was given a tour of the farm and heard about some of the concerns facing the dairy industry, after a number of milk processors announced in the summer that they would be cutting the price for purchasing milk from British dairy farmers.

Following a high profile campaign led by dairy farmers, a number of supermarkets agreed to increase the price paid for milk, whilst pledging to put in place more sustainable long-term pricing models so that local farmers are paid a proper price for their milk. This has now resulted in the creation of a voluntary code of best practice between milk buyers and dairy farmers.

Since becoming elected as the MP for Central Suffolk and North Ipswich, Dr Dan has fought for the interests of local dairy farmers in his constituency, and last year organised a debate in the House of Commons to highlight the issues facing British milk producers. He used this debate to demand further clarity over the Government’s proposals to establish a Groceries Code Adjudicator to enforce the Groceries Code, which has since started its legislative passage, and to call on large supermarkets to pay a fair price for the milk produced by local dairy farmers.

Dan has been calling on large supermarket retailers and processors to exercise greater corporate responsibility in their contractual arrangements with milk producers, and he will be continuing to closely monitor the effectiveness of the voluntary code of best practice so that our local farmers in Suffolk are given the price they deserve for their milk. Dan would like to thank John and Andrew Bullock for showing him around their farm, and he looks forward to visiting again.