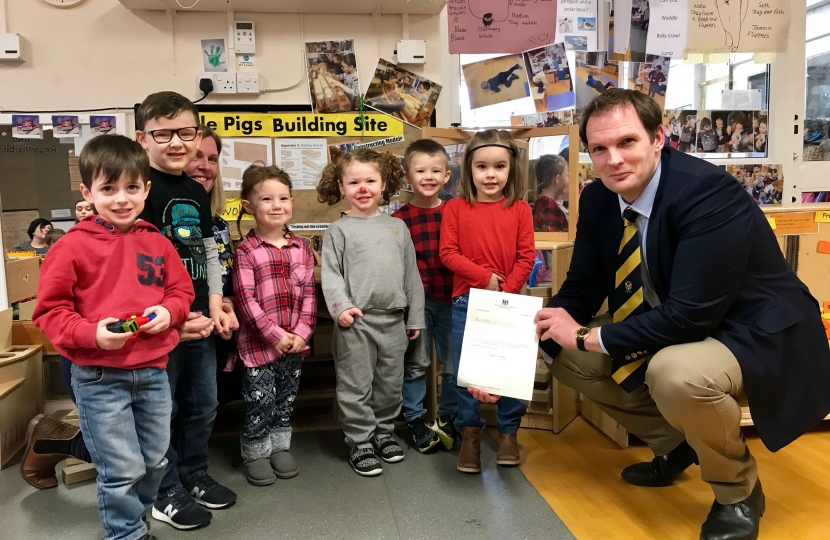 As part of their learning experience at Highfield, the children have been learning about the effects of climate change and air pollution. The children were reading popular children's book "Five Little Men in a Flying Saucer" when they were moved to write to the Prime Minister, asking her to help stop further damage to the planet.

The book tells the story of five little men who come to visit Earth from Outer Space and when they arrive, they don't like what they see. Seeing Earth neglected and spoiled by the effects of air pollution, climate change and the destruction of rain forests, the spacemen flew away, one by one.

Speaking about the visit, Dr Dan said "I was delighted to deliver this very special letter from the Prime Minister to the children at Highfield Nursery. They have clearly been motivated by the story of the spacemen and I think we can all take little steps to play our part – switching off lights when they're not needed, thinking about food miles, or cycling or walking, instead of taking the car."

"Visits such as these are so important in strengthening the link between what an MP does locally and how they can make sure that the voice of our communities here in Suffolk are heard in Parliament – in this case, the children had a direct audience with the Prime Minister!"

Lil Newton, Head Teacher at Highfield Nursery said "Here at Highfield, we work hard to make education relevant to the children and the world they live in, and to develop their capacity to become active, responsible and connected citizens. This process starts young and has real potential if it is embedded in the ethos of early years provision, rather than a bolt-on."

"Grown ups often under-estimate the capacity of small children to have an active voice in things that matter to them and they are keenly interested in what is fair, and what is right and wrong. They can see what needs to happen and they want adults to take responsibility for the actions the children cannot carry out, to ensure that the world is still a liveable place when they grow up and become parents themselves."

With only a week to go until VE Day, many of us remain hopeful of being able to celebrate the 75th Anniversary of Victory in Europe on Friday 8th May.  Whilst a great many events had been planned across the country to mark the occasion, sadly these have had to be cancelled due to the current Coro