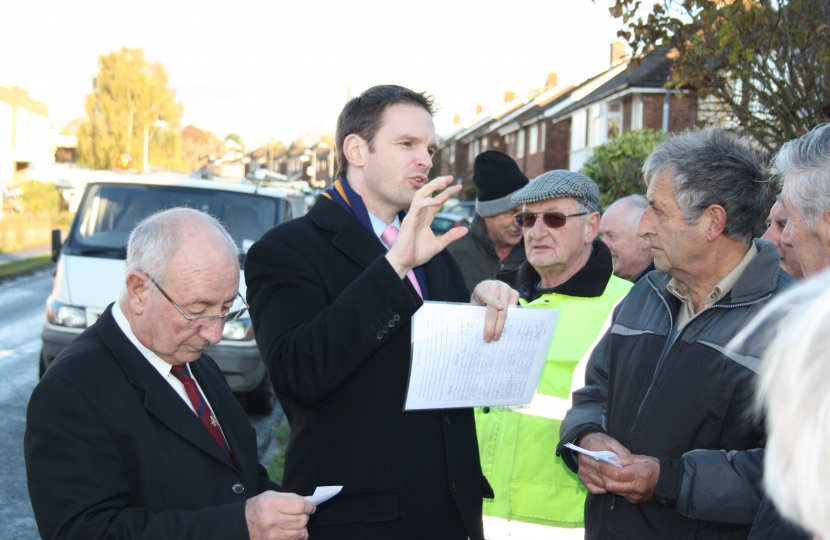 Dr Dan Poulter, Member of Parliament for Central Suffolk and North Ipswich, has pledged to do all he can to support a group of residents in their efforts to reduce disruption caused by heavy goods vehicles in Dales Road Ipswich.

During a recent visit to the road Dr Poulter was handed a petition signed by over 50 residents.

Earlier this this year, Dales Road residents approached Dr Poulter to express their concerns about the disruption they have been force to suffer as a result of heavy goods vehicles accessing a small industrial estate on the road.These vehicles park on either the side of the road or on pedestrian paths, which obstruct the view of residents attempting to leave their driveways outside their homes. The HGVs also generate unwanted noise outside homes during anti-social hours, which has made life very difficult for many residents.

Dr Poulter has already visited the site on many occasions and has written to the Secretary of State for Transport and the Traffic Commissioner, to pass on the concerns of local residents. Councillor David Goldsmith, who was also present during the visit, has also taken up this issue with Ipswich Borough Council.

Dr Poulter said, ‘For years, residents in Dales Road have had to put up with the disruption of large lorries parking outside their homes, often early in the morning or late in the evening.’

‘I have already raised this ongoing issue with the Transport Secretary and will continue to work with Councillor Goldsmith in supporting the residents of Dales Road to find a solution to this problem.’