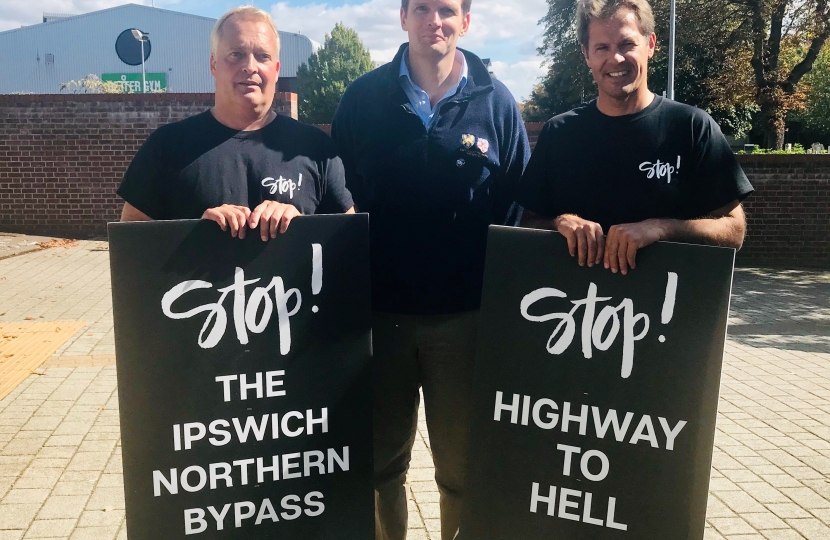 Central Suffolk and North Ipswich, Dr Dan Poulter, has today laid a petition in Parliament, urging the Government to reject calls for an Ipswich Northern Bypass.

The petition, containing in excess of 5300 signatures, has been steadily gathering pace since it launched in late July 2019 and contains signatures from residents living in North Ipswich, Kesgrave, Rushmere St Andrew, Claydon, Grundisburgh, Westerfield and Hasketon, to name but a few.

Dr Poulter has been leading the fight to stop the bypass, working closely with the Stop! campaign and a number of Parish Councils, since proposals for an Ipswich Northern Bypass were put out to consultation in July this year.

Presenting the petition in Parliament, Dr Poulter thanked Nick Green, Nick Deacon, Gerard Pearce and members of the Stop! team, adding that “It is vitally important that the opposition to the Ipswich Northern Bypass of an overwhelming number of my constituents in Central Suffolk and North Ipswich is put on the record in Parliament, and a clear message sent to the Department for Transport that they should never consider backing Suffolk County Council’s proposals for the road.”

“The Ipswich Northern Bypass is wholly without merit, lacks evidence to support it and its time for Suffolk County Council to go back to the drawing board and develop sensible and sustainable solutions for our county town of Ipswich.”