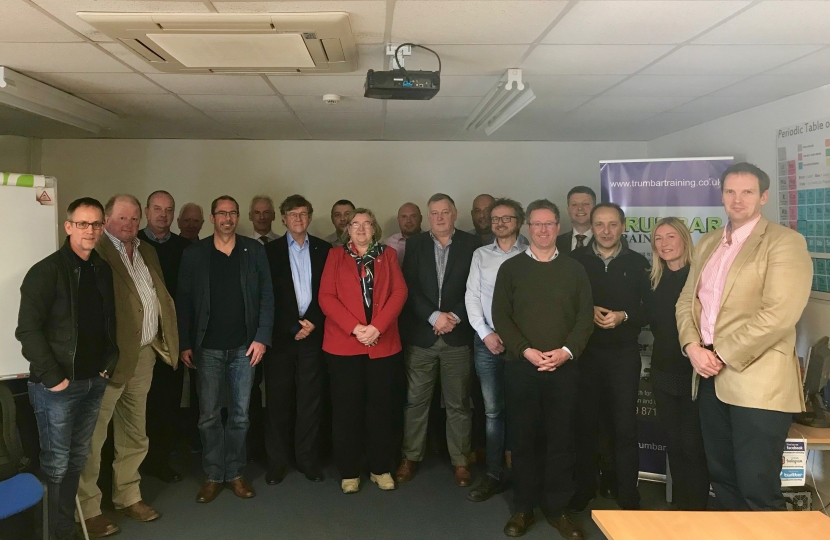 Central Suffolk and North Ipswich MP, Dr Dan Poulter, has led a special summit meeting between road and land management agents Bidwells to help hauliers in their fight to ensure fair parking and traffic management on the Trinity Industrial Estate in Felixstowe.

The summit follows on from a Parliamentary debate which Dr Dan held last December after being contacted by a number of hauliers in Central Suffolk and North Ipswich, all of whom were complaining of escalating problems with spot fines from Proserve Parking Enforcement for trespass when they were delivering to and from businesses on the Trinity Park trading estate at the Port of Felixstowe.

Since the debate, Dr Dan has met with a number of MPs from around the country, all of whom had been approached by hauliers in their own constituencies who have also been affected by aggressive traffic enforcement measures at the Trinity Trading Eatate.

All of the hauliers accept the need for managing the flow of traffic and are happy to pay the fines when an offence has occurred, but as Dr Dan outlined in Parliament, recent experiences have included fines being issued to lorries when a vehicle has simply stopped to make a manoeuvre.

The meeting allowed hauliers to raise their concerns with Bidwells, and was attended by around 30 hauliers from around the country – coming from as far afield as Aberdeen, Grimsby, and Deeside, and was supported by the Road Haulage Association and Fleet Transport Association. After an open and frank discussion, all attending the meeting are confident that positive progress will now be made.

A number of positive outcomes were agreed at the meeting including the introduction of a new, independent appeals process for fines, a commitment by Trinity and Bidwells to ensure that any enforcement companies contracted to manage the traffic flow on the estate are members of an accredited trade body. Bidwells will also be reviewing their traffic management protocol for the the site.

Following the meeting, Dr Dan said "I am pleased that after a very positive and constructive meeting between the hauliers and Bidwells, a positive and sensible way forward seems to have been agreed. There has never been any question about the need to ensure the free flow of traffic on Trinity Estate, but there is a very clear need for fairness and transparency and I am confident that this can now be achieved."

"It was important to allow everyone the opportunity to have their voice heard and I am confident that matters can now be resolved in a fair and reasonable manner. I have committed to chair a further meeting to review progress in three months' time, and I would like to thank Trinity College, Bidwells and the hauliers for coming together to find a pragmatic solution to the issue of traffic enforcement at the Trinity Estate."