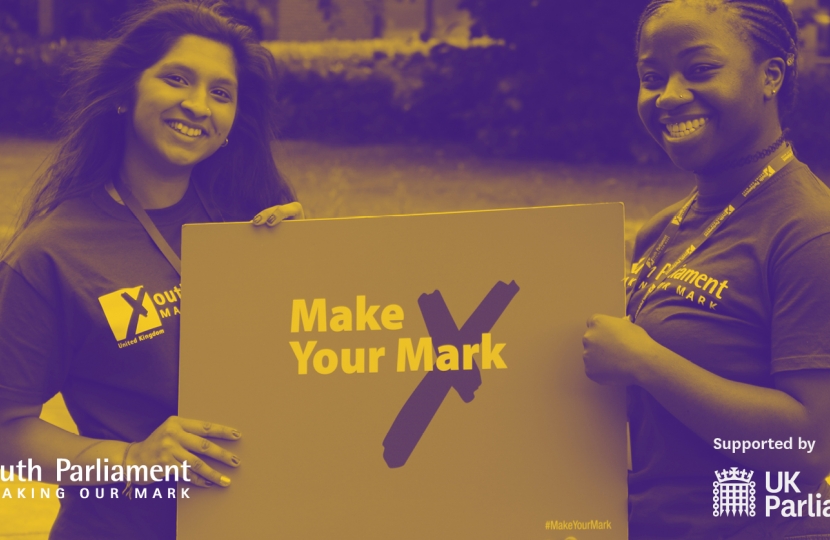 Make Your Mark is an opportunity for 11-18 year olds across the UK to have their say and to begin their democratic journey by voting on the policies they want to introduce or change.

The issues voted as the most important will be debated by Members of Youth Parliament, who will campaign to influence the UK Parliament and their local representatives, ensuring that the views of young people are listened to by decision makers.

This is your opportunity to influence decision makers who can make a real difference on the issues that matter to you.  Make Your Mark is one of the most important and influential ways young people can take part in a democratic process.

Speaking about the initiative, Central Suffolk and North Ipswich MP Dr Dan Poulter said "As a regular visitor to schools across Central Suffolk and North Ipswich, I am always heartened to see our outstanding students and young adults so engaged with politics and current affairs.  With a range of policy issues including university fees, inclusion and diversity, mental health, climate change and more, I would encourage all those aged between 11 and 18 years to make their mark and cast their ballot before the closing date on 30th November."

Make Your Mark is British Youth Council campaign, supported by the UK Parliament.

Member of Parliament for Central Suffolk and North Ipswich, Dr Dan Poulter, today visited Castle Hill Community Centre in North West Ipswich to see first-hand the fabulous work going on to support some of the most vulnerable in our communities.